You are here: Home distracted driving Distracted Driving is Deadly

In a previous article I mentioned that distracted driving is the most deadly killer in Ontario. This is more now than drinking or speeding.

Drivers have been banned since 2009 from using mobile devices behind the wheel unless they are hands free. Drivers can be fined upwards of $280.00 if caught violating this law.

Legislation will be passed shortly that really ups the levels for these fines.

From the chart below, you can see that it is not just your mobile devices that are distracting you. The following items are often cited by drivers in surveys:

Distracted Driving By Age and Cause

Interestingly enough, a report from State Farm indicates that most drivers think that 93% of other drivers drive while distracted, while only 53% of them admit to driving while they themselves are distracted. This is not unexpected since most people are not very introspective. (For instance, 80% of people think that they are smarter than average!)

State Farm says that distracted driving is the most dangerous driving issue, followed by running a red light or stop sign, aggressive driving and speeding.

In another poll, (see Graphic Below) parents were asked to assess their teens’ most frequent driving mistakes: 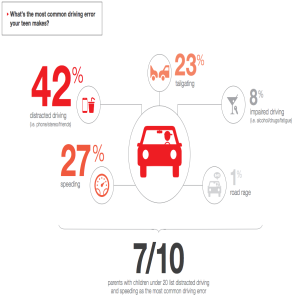 Most likely distracted driving mistakes made by teens.

Additional responses were requested from drivers as to what safe driving advice that they try to enforce most with their teens, and the following information was gleaned: 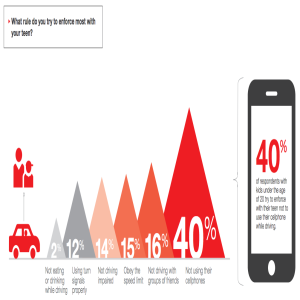 Distracted driving behaviors that parents try to enforce with their teens.

You will notice the differences between what they think that their teens are doing wrong, and what it is that they are actually re-enforcing with their teens.

Parents would be well advised to stress eating, fiddling with controls and rubbernecking as behaviors to avoid.